Two years ago, dear friends from Brooklyn relocated to Baltimore. Mercifully, so did Beth and Don’s legendary Memorial Day Barbecue.

We arrived Friday evening in time to hit a block party celebrating Open Walls Baltimore, the (remarkably well-lit) PerVerse poetry reading at Cyclops, Joe Squared for some fine coal-fired pizza, and Mount Royal Tavern–which is everything you want in a local bar. 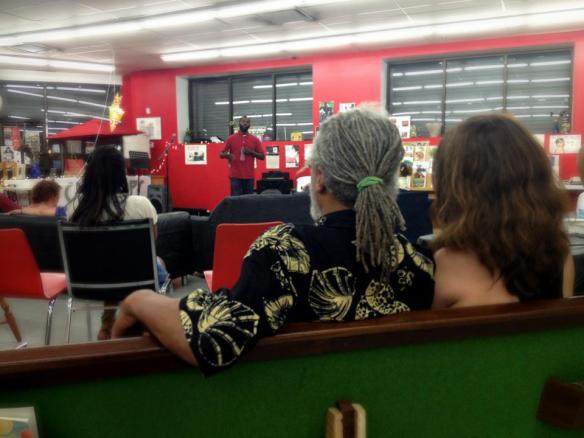 Round about midnight–after several beers and an undisclosed number of glasses of wine–it was time to prep the meat. I had it in my head that I wanted to do a whole, untrimmed brisket, but it turns out those aren’t so easy to come by on a day’s notice. Somehow, overnight Don had managed to source a 13-and-a-half pound cut with a nice fat cap and well marbled flesh. Better yet, he’d gotten it from a local beef packer and slaughterhouse, J.W. Treuth & Sons, at a very reasonable price.

At home I’d assembled a dry rub of salt (about half a cup), hot Spanish paprika (1 tablespoon), cayenne (1 tablespoon), cumin seed (1 tablespoon), sugar (1 tablespoon) and black and green peppercorns (probably a quarter cup in total). I toasted the cumin and peppercorns in a cast iron skillet until they started to make popping noises and then ran them through my pepper grinder. (Note to self: must purchase dedicated spice grinder.)

A dry rub contains more salt than seems reasonable and needs time to be absorbed by the meat. There’s really no pretty way to do this, so I removed my jewelry and got intimate with the brisket.

Don had a lot more prep work to do, so I stuck around for a bit carting cuts of meat up from the basement and rooting for spices. He’s famous for his ribs. I learned a couple of his secrets, but I’m pretty sure I’d get in trouble if I shared, so this picture will have to suffice.

Beth spent Saturday baking such wonders as red velvet cake, cherry pie and a tunnel of fudge. Don fired up the smoker with apple wood, fig wood, and some other woods I can’t recall. I spent the day eating crabs (at Cantler’s in Annapolis) and tracking down the perfect summer sandal (at Ma Petite Shoe in Hampden). Later than night in Beth and Don’s backyard we ate mussels marinara brought by a guest who grasped the nature of a potluck but didn’t quite grasp the date of the party.

I’d made the mop sauce the night before leaving town. Having started the process at midnight, I was limited to items in my pantry and refrigerator. I managed to dig up four toasted dried whole New Mexico chiles, a red onion, a quarter cup of brown sugar, a whole bulb of elephant garlic, half a cup of molasses, a quarter cup of canola oil, a tablespoon of dried mustard powder, a couple of tablespoons of tomato paste, a quarter cup of tamari, half a cup of cider vinegar, most of a bottle of beer, a shot or so of tequila, some cumin, ground black and green peppercorns, miscellaneous hot sauce… You get the idea. I toasted the chiles in a cast iron pan and then pureed them in the small work bowl of my food processor along with the red onion, garlic and some of the liquid ingredients. I cooked this down in a pot, tasting and adding things as I went, until I was too tired to cook it any more. I think that the key here is that you want a very flavorful but balanced sauce that’s sweet, spicy, salty and tangy all at once. 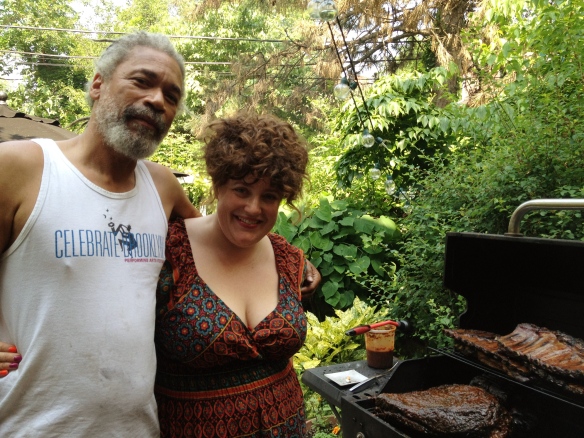 The ribs and the brisket finished cooking on the grill while the smoker turned its attention to jerked chicken legs, pork shoulder and other meaty delights. I basted the brisket with a mop, periodically flipping the meat and adding layers of sauce to build up a nice caramelized crust on the meat. Flipping it was no joke. 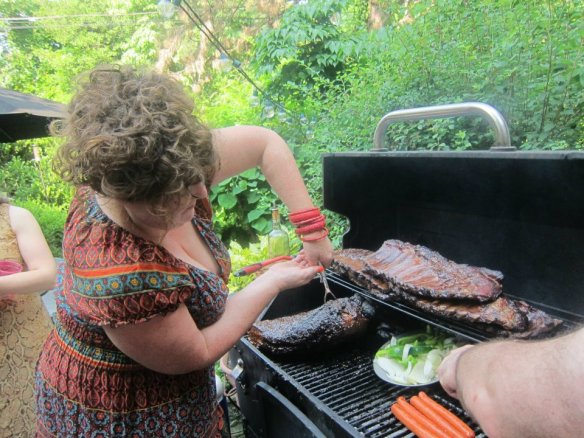 The general rule of thumb is one hour per pound of meat, but it can take longer. Just be sure to keep the heat low so it doesn’t dry out. Our brisket, which had mysteriously shrunk to 12.5 or 13 pounds after some of the menfolk came home from a bar crawl the night before, probably spent 10 hours in the smoker and another three hours on the grill. At this point, I pulled it off the grill and began slicing–thin and against the grain to maximize the tenderness.

The brisket never actually made it to the buffet table. Folks appeared in the kitchen, plates in hand and devoured the slices as fast as I could cut them. At some point, the thicker end went back in the smoker and Don turned his attention to the ribs. He moved them to the lower rack of the grill and glazed them with his own homemade sauce. This time, as I carved the meat, folks didn’t bother with plates.

From here things get a little blurry. Kindly eaters swung by the grill bearing offerings of beer, wine and a lethal rum punch. We thanked them with bits of blood sausage, antelope, duck and venison. I hear there was python, but I must have been otherwise occupied at that point. In the words of one of the revelers (whose last name, and I am not making this up, is Bacchus):

For several hours there was a tribute to Don Cornelius in the kitchen with revelers lined up on either side dancing and sweating where in order to get to the patio and grill or back to the veggie and dessert spread in the dining room, you had to strut yourself on a Soul Train line! 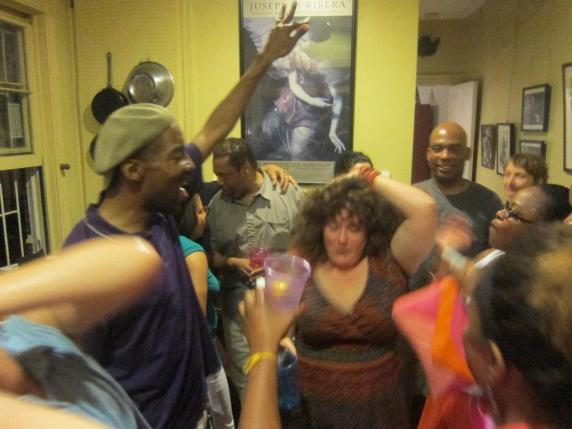