I awoke Thursday to yet another glorious morning in San Juan. It was sunny and the temperature was holding steady around 82. I was staying a couple of blocks from Ocean Park Beach, where I’d spent a lot of time dozing and gazing at the view.

Tragically, it was the last day of vacation. My flight arrived at JFK in the depths of winter. An 80-degree temperature drop in a little over four hours is no joke. I survived the taxi line and the ride home clad in yoga pants, a tank top, a cardigan, and a pair of flats that still had sand inside. I walked in the door of my apartment and immediately donned silk long underwear, which I have been sporting pretty much ever since.

I managed to make the trek up to the Upper West Side that night for the New York Abortion Access Fund‘s Celebrate Access Awards, but there was no way I was leaving my house on Friday. A hearty dish was in order, something that would necessitate leaving the oven on for an extended period of time. I had some French navy beans I’d picked up during a shopping spree at Kalustyan’s and a wide variety of root vegetables from my January CSA share. This plus whatever meat I had socked away in the freezer would surely warm me.

Cassoulet is a slow-cooked casserole originating from the South of France. As with many classic French dishes, cassoulet involves very specific ingredients and elaborate preparation. I have had it once or twice and it is tasty, for sure. But it’s hard to go wrong with beans, meat, and a slow braise. And so I present you with…

This make a lot of food, as evidenced by this photo of the Dutch oven minus my serving.

Fortunately, it reheats brilliantly in the oven. Just stuff some into an individual ramekin, top with some water and bake in the oven until your blog post is done–or until the smell overwhelms you and you decided that you’ve earned a break. 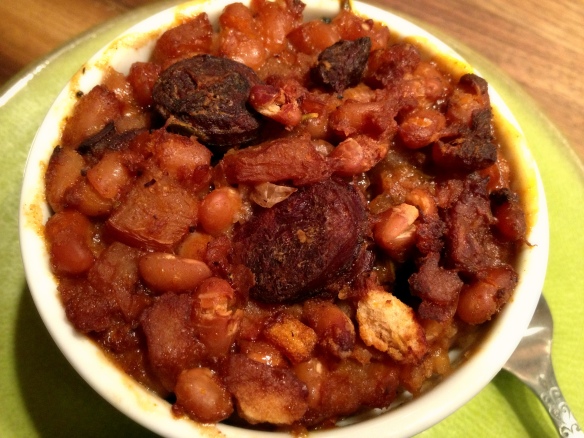