As those who know and (miraculously, still) love me are aware, I am not a morning person. But work has been brutal, so I went in a full hour and a half early today in an effort to get a jump start. Ten hours later, I dashed out the door. I managed to bang out a few more emails on the subway ride to pick up my weekly CSA share, which included butter leaf lettuce, blueberries and two cucumbers that mocked me for the four I still had stashed from last week. On my kitchen counter was some fresh basil my neighbors gave me when I dropped off the keys so they could watch my cat. (How’s that for a good trade?)

I’ve still got a number of hours of work tonight, including a hundred-mile drive due East. But I’ll be damned if I’m not going to have a tasty and nutritious meal first. 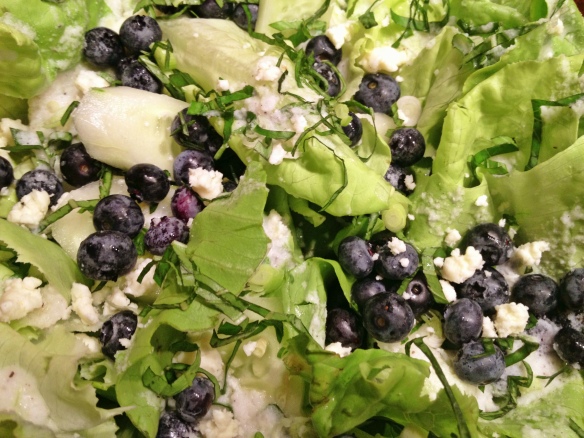 This came out much better than expected. There was a certain harmony of flavors that transcended what were already some delightfully fresh ingredients. There was also a lightness I couldn’t place until halfway through wolfing my salad down, when I remembered that I had opted for coconut rather than olive oil. Trust me on this one.