I just returned from a truly epic road trip down South. It’s going to take me a minute to put the whole thing down in writing, but suffice it to say that one of the many highlights was consuming five different specimens of pulled/chopped pork in 24 hours. Of all the fine swine that we consumed, the winner by unanimous decision was the unsuspecting plastic-wrapped BBQ sandwich from Cooper’s Country Store in Salter, South Carolina.

Cooper’s is a classic combination gas station and country store that I suspect hasn’t changed much since it was built at a country crossroads in 1937. Mercifully, they do take credit cards, so we were free to stock up on Blenheim’s ginger ale, locally ground grits, field peas, and all manners of pork. My traveling companions couldn’t resist the lure of the country hams that were curing behind screens. Being a single gal who lives in 600 square feet, I limited myself to several pounds of bacon and smoked ham ends, which would make excellent seasoning meat. 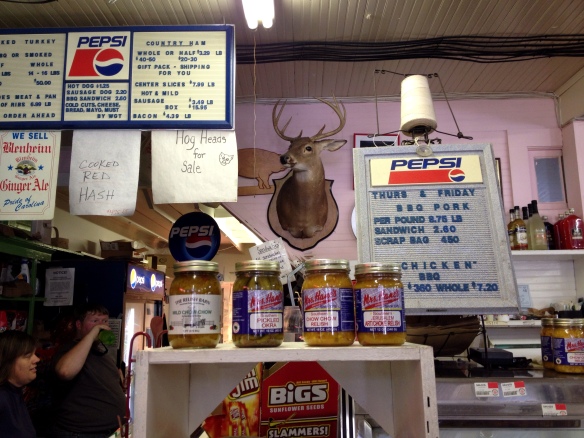 But back to that sandwich. It came on an ordinary enough white hamburger bun. No slaw. No dripping sauce. Just pulled pork meat (whole-hog, as is de rigueur in South Carolina) that was smoky but not overpoweringly so, assertively vinegary, a good bit spicy, and just the tiniest bit sweet. This was the barbecue of our collective dreams.

Three days later, I found myself back in Brooklyn, catching up on real life. After 36 hours of kale salad, haricot vert and sushi, I was feeling recovered and even a bit nostalgic. The field peas that had made it out of my backpack but not into the cupboard were calling out to me. And, of course, there was that seasoning meat. 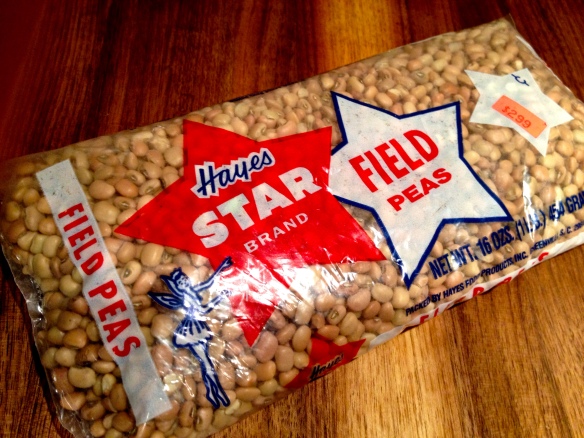 Field peas are traditionally served over long-grain Carolina rice. But, if you happen to have a pot of kale and mustard greens slow cooked with some more of that seasoning meat, that would do fine too.