There comes a moment in every CSA season when you have to admit that the vegetables are winning. I am proud to report that, despite the odds, this is not that moment.

It’s been a solid week since I was home for dinner and the vegetables have been piling up at an alarming rate–particularly given my impending trip to Austin. When I arrived home this evening, half of Saturday’s haul was still spilled across the kitchen counter (where I left it before dashing off to meet friends for some bracing Malaysian soup). And so I sucked it up and dragged everything out in order to reorganize and give the crisper a much-needed scrub. 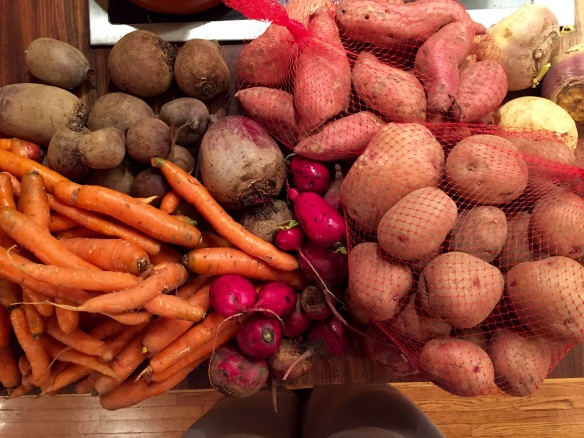 There were a lot of root vegetables, including some radishes that needed serious love. (For perspective, those potatoes are two bags deep.) There was kale that was most definitely not going to wait until my return next week. There was the last of the ricotta I had picked up a couple of weeks ago at the farmers’ market. And there were some desiccated bread heels. Game on.

Crank the oven up to 450 with a large cast iron skillet inside. Meanwhile, prep your vegetables. When the oven is just about ready, remove the skillet. Add the olive oil, radishes, shallots, kale, red pepper flakes, salt and pepper and toss. Sprinkle the breadcrumbs, ricotta and parmesan over the top and pop the pan back into the oven. Cook for 20-25 minutes until the top is lightly browned.

This would be a lovely companion to roast chicken or pork. I ate it with a side of work emails.