Last week’s CSA share included a handful of beets. I knew they would keep until this week, when I had a hunch I’d be getting some more. Sure enough, Tuesday brought another bunch–along with some of the crispest cucumbers I’ve ever tasted. 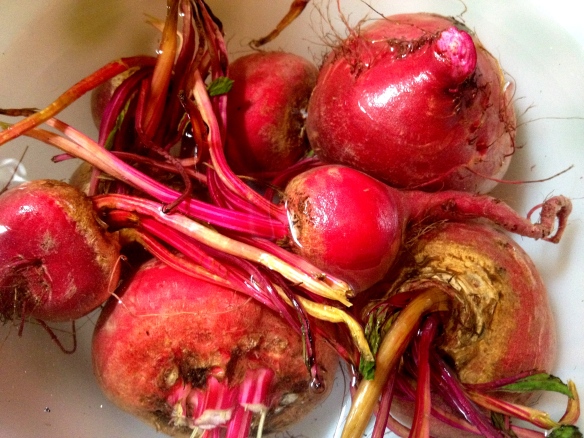 That very day, NPR reported that this is the hottest summer on record in the U.S. Roasting the beets was out of the question.

But cold borscht was not. I boiled my beets and eggs while preparing my morning coffee and a garlic, beet greens and egg scramble that I ate with a sliced fresh tomato–the first of the season! With the hot work completed early in the day, dinner preparation would really just be a matter of assembly. 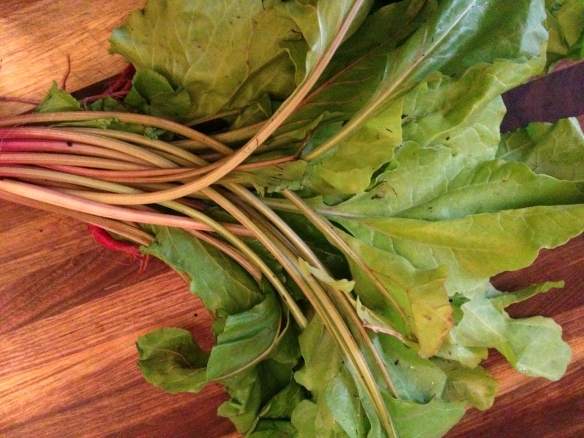 Clean the beets by soaking them in water and scraping off any lingering dirt. (I recommend using the edge of a teaspoon; three days and a few showers later, I am still trying to dig dirt our from underneath my thumbnail .) Trim the tops, bottoms and any rogue hairy stuff. Add these along with everything above except the horseradish to a large pot, cover with water and bring to a boil. Reduce to a simmer and cook until your beets give easily when pierced with a fork (somewhere between one and two hours). Remove beets and strain liquid into a bowl using a chinoise or other fine mesh sieve. Once beets have cooled, slip peels off with your hands. Add all but one of the beets, reserved liquid and horseradish to the work bowl of your food processor and purée until smooth. You may need to add more water to get the desired consistency. Pour mixture back into the bowl and refrigerate for at least a few hours. (A full day would be fine.)

Whisk minced dill and crème fraiche, sour cream or plain yogurt into soup and season to taste with fresh-ground black pepper, salt and/or vinegar. Ladle soup into bowls, garnishing with halved eggs, beet and cucumber cubes and sprigs of dill. 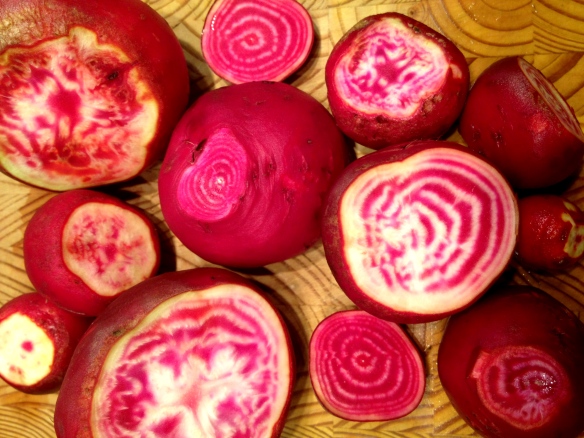 It turned out that these were Chioggia beets, which were breathtakingly beautiful, though the dramatic stripes faded a bit during cooking and, ultimately, made for a borscht the color of Molly Ringwald’s prom dress at the end of Pretty in Pink. (Am I alone in having found that dress rather disappointing after all of the buildup?) 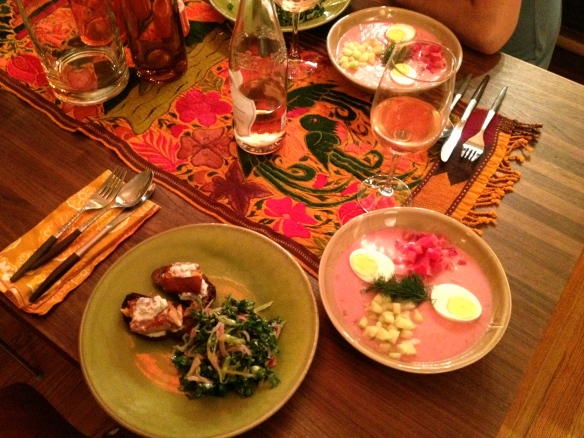 Still, it was damn tasty. I served it with a kale, sugar snap pea and pickled red onion salad and toasted pumpernickel bread topped with a crème fraiche spread and some killer smoked salmon that I’d picked up from Josephson’s Smokehouse in Astoria, Oregon. (Astoria is the town where Goonies was filmed, which makes for two ’80s movie references in a single blog post.)

An earthy rosé rounded out our feast, though I suppose that vodka would have been more traditional. 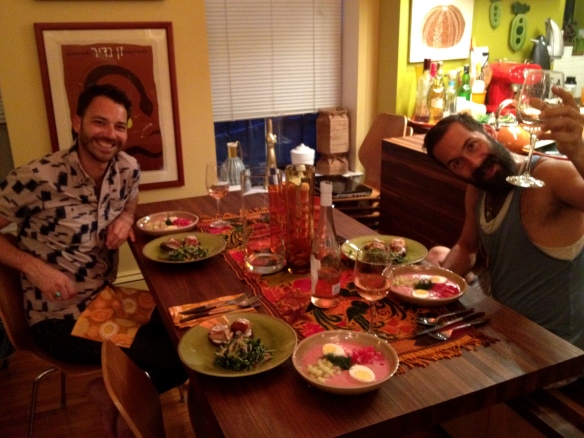