A sore throat and persistent headache sent me home early today. I had a hunch I might not be leaving my house for a day or so. On my way home I swung by the grocer to grab ginger, chicken broth, chicken thighs, escarole and milk for tomorrow’s coffee.

For lunch I whipped up a quick soup by simmering the chicken in broth along with some chopped ginger. When the chicken was cooked through, I pulled it out and added soba noodles. Just before serving, I added the meat (now shredded) along with escarole, soy sauce, scallions, cayenne pepper, cilantro and a few drops of sesame oil. 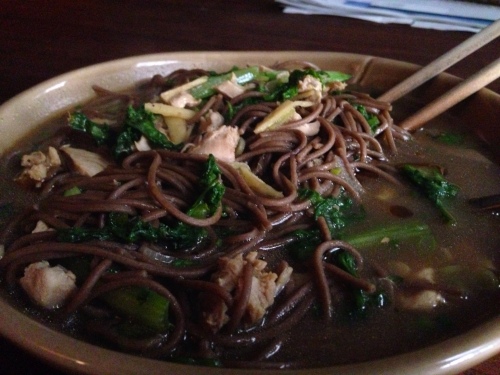 For a brief moment I could breathe clearly and my throat did not ache.

I spent the rest of the afternoon catching up on email and dialing in to various meetings. At some point I managed to knock a nearly full bottle of red wine from the kitchen counter while attempting to make myself a cup of tea.

Naturally, I did not have any paper towels in the house. Cleanup was quite a chore, as was extracting the glass shard that lodged itself under my pinky nail.

By the time I finished, my stomach was growling. I was craving something spicy that would again offer temporary relief from what I am praying is just a cold. I debated making another bowl of soup, but then I flashed on Friday’s late night Indian takeout, which was truly awful. I swear one of the dishes was a can of chickpeas with some curry powder and vegetable oil stirred in and then heated in the microwave.

Surely I could do better with whatever ingredients I had on hand. 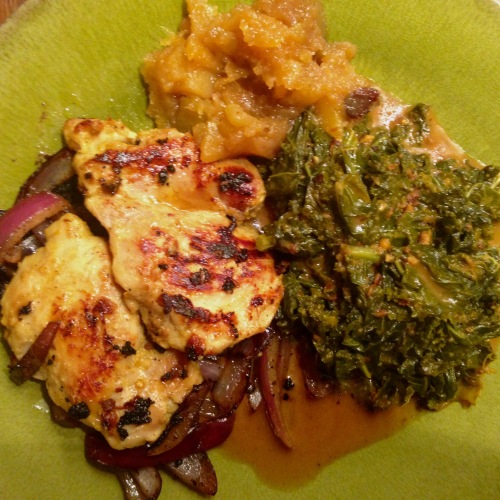 If I were serving this for company, I would have made a pot of Basmati rice. Instead, I packed half away for tomorrow and added a dollop of mango chutney.

You know what would have been good with this meal? A nice glass of red wine. Sigh.