Tuesday is CSA pickup day. Farmer Fred excels at growing greens, so a big salad has become part of my weekly ritual. But, as the thermometer climbs, the delicate lettuces are giving way to more heat tolerant crops. This week brought iceberg, which should keep just fine in the salad spinner. Tonight’s haul also included the first of the sweet corn. Now this demanded to be eaten right away.

Roughly chop the bacon, add to a cast iron skillet, and bring up to medium heat. Cook, stirring occasionally until bacon is mostly crisp and rendered. Set bacon aside on a paper towel. Chop and add the onion (but not the greens) and stir regularly until limp and somewhat translucent. Mince the jalapeño. Slice the corn niblets off and freeze the cobs for future chowder. Scoop the onions to the side, crank the heat up to high, and add the corn and jalapeños. Let sit for a few minutes until the corn starts to take on color. Stir and repeat a few times, mixing in the cooked onions as you go. Roughly chop the beet greens and thinly slice the onion greens. Add these and stir until just wilted. Season with salt and pepper. Add cilantro and crumbled bacon off the heat.

At this point, you could just grab a fork and dig in. You could also serve it as a side with some fried chicken or even use it to top a salad. I opted to stuff some into a couple of corn tortillas and drizzle with some Tapatio hot sauce and a generous squeeze of lime.

Fourth of July weekend I stumbled on a small, nicely-seasoned cast iron skillet in a junk shop up in the Catskills. The remaining corn, bacon and beet greens will make for a most excellent breakfast when topped with a perfectly fried egg. 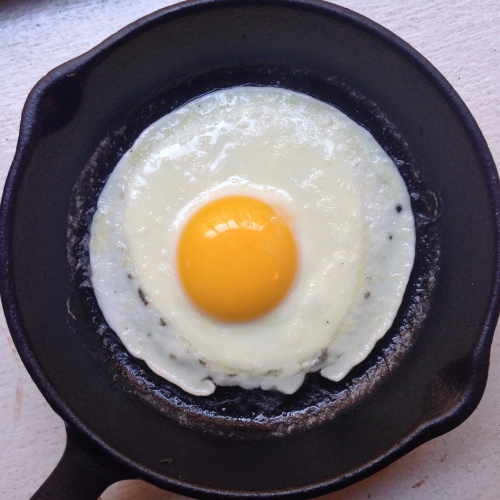