On Saturday I took a break from schoolwork to meet up with a friend for brunch (shakshuka for me, a tuna melt for my date) followed by manicures and pedicures (swimming pool blue and fire engine red for me, sunset orange for her).

Afterwards, we swung by the Fort Greene Park Greenmarket where I thought I might pick up something for dinner. I had a guest due at 8:00 and a mountain of reading to get through, so I was looking for a dish that could cook in the oven without much tending. On a whim, I bought a 4.5-pound whole Moulard duck from Hudson Valley Duck Farm.

I arrived home to find my neighbor Chris planting daffodils and pansies in the planters outside our apartment buildings. As we chatted, I set down my heavy tote bag and mentioned the duck inside. Chris, who is no slouch in the cooking department (he had made Momfuku’s Korean pork for a work potluck just the day before), wished me luck, noting that he had never cooked a whole duck. Come to think of it, neither had I.

Back in my apartment, none of the cookbooks included recipes for a whole duck. I flipped through some online recipes, each with more elaborate preparations than the last. It seemed that I should have started preparing my duck a couple of days ago. Then I remembered that the woman working the stand had encouraged me to check out Melissa Clark’s video on The New York Times website. Three and a half minutes later, I was good to go. Clark provides a simple, straightforward technique that you can riff on in an endless number of ways–the ideal recipe, in my book.

I rinsed the bird, hacked off the neck, made small incisions all over the skin (taking care not to nick the flesh), and rubbed it down with salt, pepper, cayenne powder, and some Chinese five-spice powder that I had on hand. Then I set it in the refrigerator uncovered and got down to my reading.

A few hours later, I removed the duck and let it come to room temperature while I preheated the oven. I stuffed the bird with large hunks of fresh ginger and garlic and half a lemon left over from a previous meal. At the last minute, I decided to drizzle the duck with a bit of soy sauce and honey.

Aside from some temperature adjustments and one flip, the duck took care of itself for the next couple of hours. As the heady scent filled my apartment, I realized that none of the wines I had in the house would hold up to the bold flavors, so I ran to the wine shop four blocks away. The shopkeeper could smell the duck and spices on me and, after some consideration, we settled on a Riesling and an Old Vine Zinfandel.

The duck rested draped lightly in tinfoil while I prepared rice and purple kale with leeks, soy sauce and rice wine vinegar. 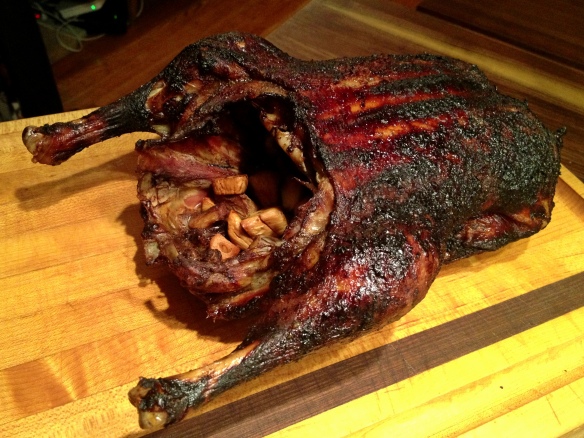 The duck was excellent–so much so that, by the time we had finished picking, there was nothing left but the carcass and half a breast.

I awoke this morning feeling better than expected given how much wine we drank. I was determined to get as much as I could out of my duck. I was also determined to procrastinate on the day’s schoolwork. I made some coffee and got to work.

First up, I chopped the leftover meat and rendered it in a small skillet over medium heat before adding some finely sliced mustard greens. Once the greens had wilted, I added a bit of soy sauce and rice wine vinegar. Breakfast was served.

Following instructions I found online, I put some water in a small pan, added the excess fat and skin that I had trimmed from the duck prior to roasting, and brought it to a simmer over medium heat. An hour or so later, I poured the concoction through a fine mesh sieve and into a gravy separator which I stuck it in the fridge. Once the fat had congealed, I poured off the residual water and was left with some truly glorious looking duck fat. I imagine I’ll use it to pan fry some potatoes and as the foundation for a roux.

While my duck fat rendered, I preheated the oven to 400. I broke the duck carcass into as many pieces as I could manage (really must get a cleaver) and added it to a roasting pan along with the trimmings from last night’s leeks, a bunch of bedraggled scallions I found in the crisper, a few carrots, some celery, and some roughly chopped garlic. I drizzled this with a tablespoon or so of duck fat I had spooned out of the roasting pan last night and popped it in the oven for an hour.

The roasted bones and vegetables then went into a medium-sized pot along with a bay leaf, several whole black peppercorns, a pinch of dried thyme, and enough water to cover. This simmered over medium-low heat while I continued studying.

After a couple of hours, the liquid was a rich brown color and my apartment smelled unbelievable.

I strained the broth into a bowl and stuck it in the fridge. After an hour, I scraped off the fat that had accumulated on the surface and poured the stock through a fine mesh sieve into a container that I stuck in the freezer. I see some killer gumbo in my future.

3 thoughts on “What the Duck?”