Today is my first day off in almost a month. It’s been so long since I had a day to myself that I’m a bit paralyzed by the possibilities. I am also seemingly incapable of sleeping in despite being physically and mentally exhausted. By 11:00am I had done a sinkful of dishes, dealt with the alarming garbage and compost situation, tried (and failed) not to check my work email, made and consumed a cup of coffee, watched the final episode of House of Cards, spent an hour or so attempting to identify a movie that would hold my attention, given the cat some much-needed affection, and contemplated a shower.

I also found time to make myself a lovely lunch with whatever ingredients I happened to have on hand.

Render the bacon in a small saucepan over medium-high heat. Scoop your homemade bacon bits into a bowl, leaving as much fat as possible in the pan. Add the onion and cook stirring frequently until soft and starting to caramelize. Scoop the onion into your bowl, add the bulgur to the pan and cook stirring constantly for a couple of minutes. The goal here it to toast your grains in all of that delicious bacon fat. Add a cup and a half of water and bring to a boil for 5 minutes. Switch off the heat and pop a lid on. After 20 minutes, remove the lid, stir and let sit for another 5 minutes or so until the water is absorbed. Stir in the bacon, onions, scallions and parsley and season to taste with salt and pepper.

If you have somehow managed not to consume all of the delicious pickled watermelon radishes that a friend brought over a couple of weeks ago, they would make a great accompaniment. If not, you might want to add a little splash of red wine vinegar to balance the flavors.

Next up for my day of rest? A shower, a pedicure and a long walk capped off with a fancy dinner at Semilla. Tomorrow it’s back to the grindstone.

We’re getting down to the dregs in terms of seasonal eating. My last CSA pickup was over a month ago. The green things at my local farmers’ market dwindled down to hearty spinach before drying up completely sometime in the middle of February. And so I have turned my attention to beans and storage vegetables (plus a little store-bought kale–hey, a girl’s gotta get her greens).

Add the beans, onion, carrot, celery, garlic, guanciale, herbs and spices to a large Dutch oven along with enough water to cover by a couple of inches. Bring to a boil, reduce to a simmer and let cook for an hour or more, until the beans are tender. Fish out the celery, carrots and bay leaves. Add the squash, celeriac, cheese rind and lemon, and top with enough water to just cover everything. Bring back to a boil and then reduce to a simmer. When the vegetables have softened (about 15 minutes), stir in the kale along with plenty of salt and pepper. Cook until the kale is wilted. 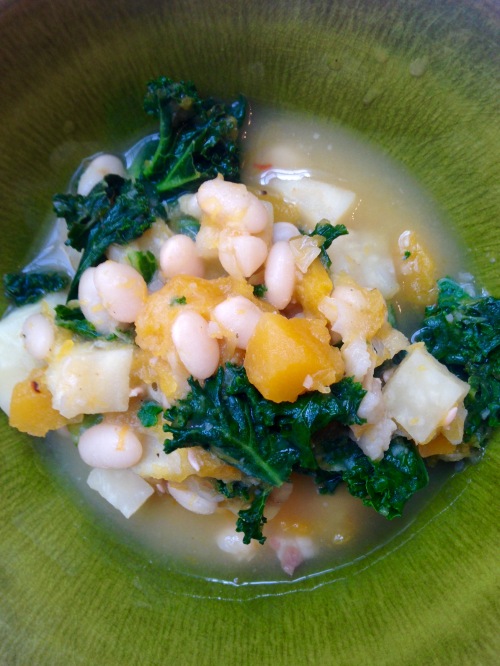 It’s going to be another long and strenuous workweek. At least I’ve packed my lunch. 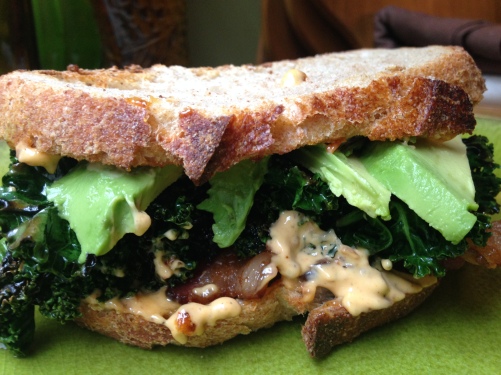 When last night’s birthday dinner somehow morphed into dancing until 4:00am but you still have to get up at a reasonable hour and put in a full day of work (yes, on a Sunday), consider bacon, kale sautéed in the bacon grease and slices of ripe avocado sandwiched between toasted sourdough bread slathered in mayonnaise and harissa