I spent this past weekend in the Catskills with Beth, who has now been my dear friend for more than half our lives. (Not really sure how that happened.) We rented a lovely creekside cabin between Woodstock and Phoenicia and spent our days brunching, checking out small towns, and posing for the occasional swimming hole glamour shot. 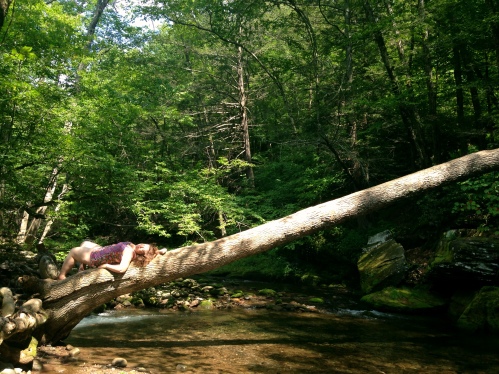 Owing to the dark and winding roads (and an absence of taxis), Beth and I opted to spend our nights at home. Fortunately, our landlord had been kind enough to lay in a full bag of charcoal. 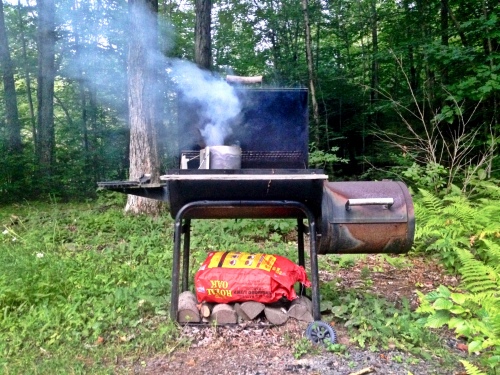 Cocktail hour started early on Friday, allowing me to get the flank steak off of the grill just as the last gasps of sunlight disappeared. 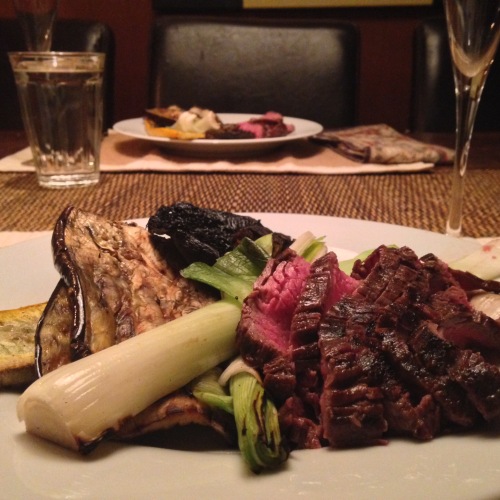 Saturday was another story. It was pitch black by the time I even thought to light the coals. Despite the dark, a persistent rain, and several watermelon cocktails, the salmon came out beautifully. Dinner was served right around the stroke of midnight. 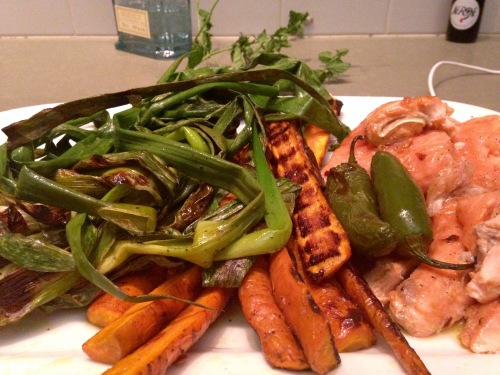 I ate well this past weekend. I did not, however, make it through last week’s CSA share. I came home from a busy Monday determined to polish off a full head of Farmer Fred’s beautiful bok choy. Mission accomplished. 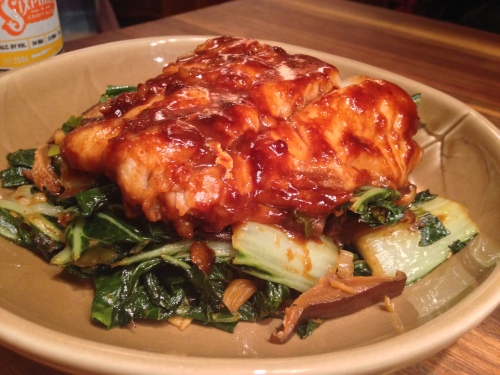 You could serve this over a pile of steamed rice. I opted to take my carbs in the form of a Sixpoint Sweet Action, which is pretty much my all-time favorite beer. Oona digs it too. 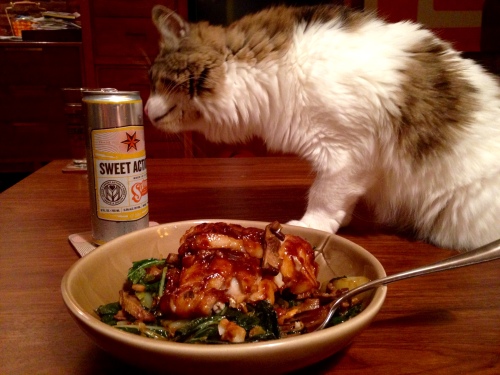 The growing season is in full swing, which means that I am spending a fair amount of my time visiting farmers’ markets and community gardens. Yesterday morning took me to one of my favorite spots in the city, East New York Farms. 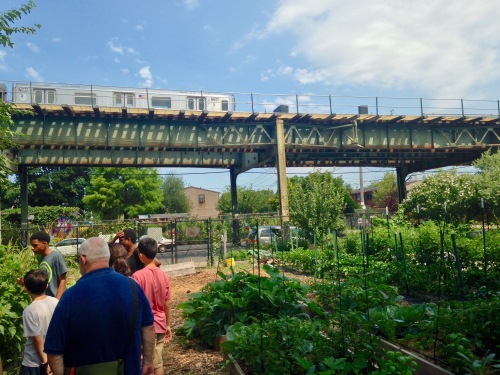 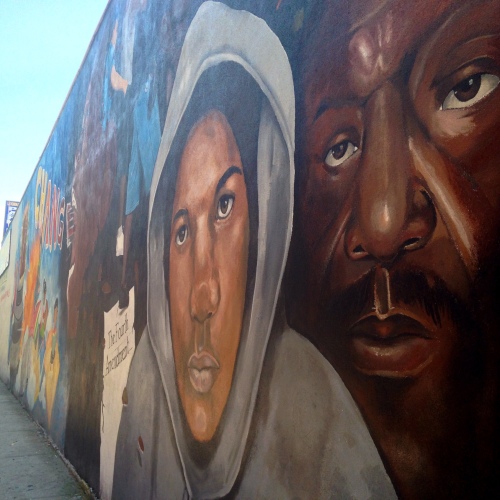 I was home by 1:00pm, laden with produce grown at the farm and in neighboring community gardens. Couple this with my weekly CSA share and you get a refrigerator full of fresh, local, sustainably grown vegetables in danger of going straight into the compost bin.

Matthew and Clint helped me put a dent in my vegetable stash last night. We had a perfect summer supper that required minimal heat: bulgur salad with cucumber, tomato and scallion; hummus with spring onion tops and green garlic; sliced kohlrabi; toasted pita; and green beans topped with toasted walnuts, rye bread crumbs, mint and feta. We finished the meal off with blueberries and a few squares of dark chocolate. We also polished off the better part of a box of rose before heading over to First Saturday at the Brooklyn Museum.

The museum was packed with happy Brooklynites of all ages. Deterred by the lines for the elevator, we made our way up several flights of stairs. Our reward was a glimpse of our friend Monica leading a pop-up talk in one of the galleries. We made plans for a drink later and headed on to The Rise of Sneaker Culture. The exhibit was hot, humid and very crowded. We were about to bail on the floor altogether when we stumbled into the delightful–if not particularly deep–FAILE: Savage/Sacred Young Minds. 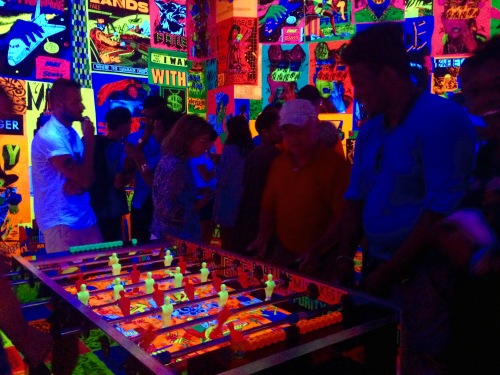 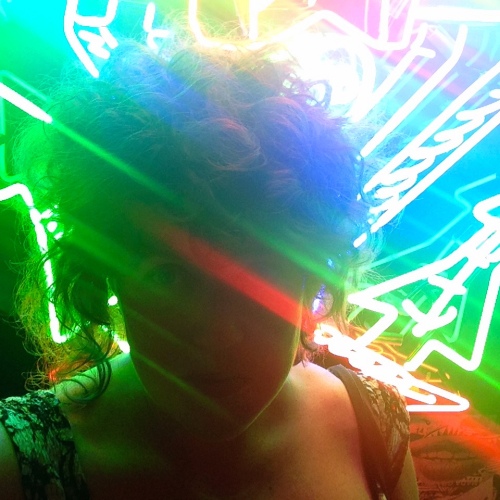 After an aggressive round of black lit selfies and a video game in which one has to search for parking on the streets of NYC, we headed outside to cool off and plan our next move. We settled on Gold Star Beer Counter, which recently opened at the end of my block. Light, refreshing beers were in order.

A round in, Monica joined us. Voices were raised. Lists of 70s movies were made. Beads of sweat were mopped. Classic rock albums were played. An undisclosed number of pale ales, lagers and hefeweizens were consumed. At some point, the lovely woman behind the bar came over to graciously inform us that they had officially closed half an hour ago. And so we settled our tab and sauntered off into the thick summer night.

Needless to say, I did not brush my teeth before bed–and woke up craving a hearty breakfast.

Bring the butter up to medium heat in a small, heavy-bottomed pot and add the onion. Sauté, stirring regularly, until the onion is limp but not yet browned. Add the garlic and Aleppo pepper and cook stirring continuously for a minute or two more. Add the cream cheese and continue to stir until you have a thick soup. Add the lamb’s quarters in batches, allowing the hot liquid to wilt the greens. Add a little bit of milk if the mixture is too thick, but the lamb’s quarters will release liquid as they break down. Continue to simmer until you’ve reached the consistency of creamed spinach, stir in the feta until melted. Add a generous amount of pepper and some salt if you think it’s needed. Toast some bread, fry an egg, assemble and enjoy. 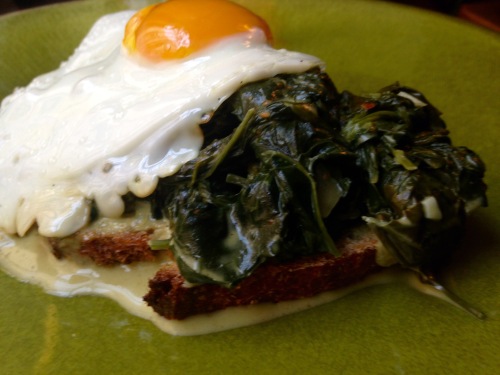