Leila and Chris were due for dinner last night. Tuesday looked very different when I extended the invitation the week before, but I am learning that the consulting life comes with an ever-evolving calendar. I texted from a client meeting at 4:30 to suggest that they come around 7:30 and rushed back to my neighborhood to pick up this week’s CSA bounty. I made it home around 6:30, but still didn’t have a clue what I was going to make.

Luckily, I had some Flying Pigs Farm Canadian bacon in the freezer to complement Farmer Ted‘s peak summer vegetables. By the time I had stashed the last of the onions and washed and dried the gorgeous purple lettuce, I’d hatched a plan. This is a meal that comes together fast, so you’ll want to have everything prepped and ready to go before you start sautéing. 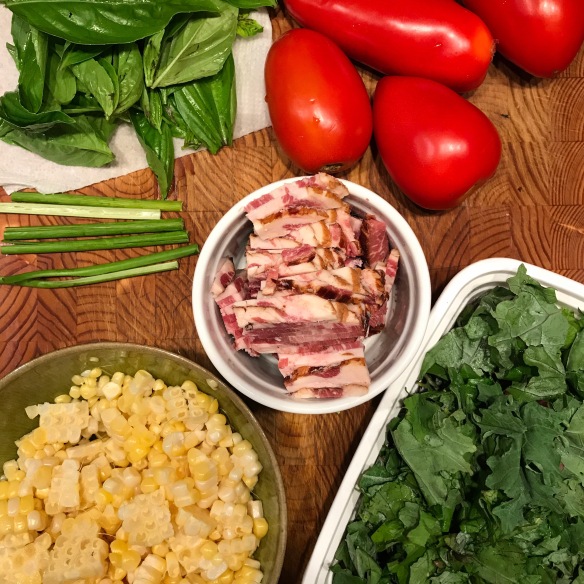 Place a large pot of salted water over high heat. When the water in your pot is boiling, add the pasta and give it a quick stir. Cook 8 minutes or until just before al dente. (If you game this right, you should be able to transfer the pasta straight from the pot to the pan. If not, no worries. Just be sure to save some of the cooking liquid when you drain the pasta.) Meanwhile, heat a large skillet up to medium with the olive oil. Add the garlic and cook, stirring continuously for a few minutes until you pick up the smell of toasted garlic. Remove and discard the garlic. Add the Canadian bacon and cook until most of the fat is released but before it gets crispy. Add the corn and cook for a couple more minutes. Add the kale and cook until wilted. Add the tomatoes and cook another couple of minutes. Then add the pasta plus about half a cup of the cooking water. Crank the heat up to high and cook for two more minutes, stirring constantly. Season with salt and pepper. Stir in the basil off the heat.

I failed to get a shot of last night’s meal, which included a salad with the aforementioned purple lettuce, yellow tomatoes and crumbled ricotta salata in a classic red wine vinaigrette plus hunks of crusty baguette. But I just polished off this bowl of leftover pasta for lunch and am surprised to report that it was even tastier served cold the next day. (I suspect this has to do with the pig fat having some time to permeate the pasta.) 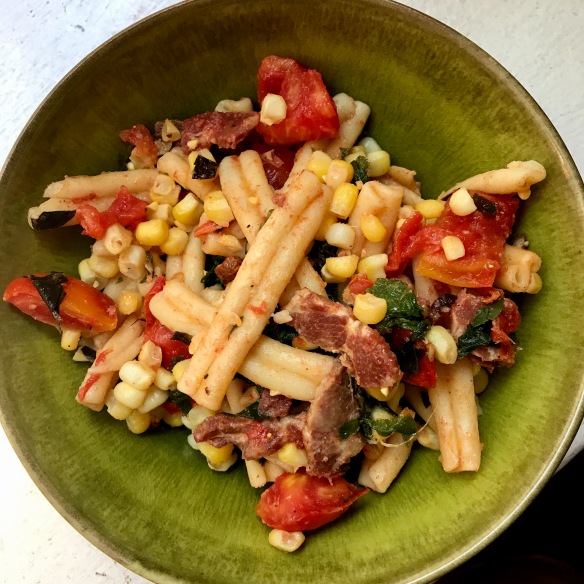 While passing through Baltimore on vacation, I met a couple of lovely artists, David Page and Lauren Schott. Over a dinner that featured two kinds of bone marrow and necessitated a trip to the basement to use power tools, it came out that Lauren and David had three fig trees in their backyard and more figs that they could handle. Fueled by marrow and a good bit of wine, I invited myself and my Baltimore hosts Beth and Don to a fig picking brunch. 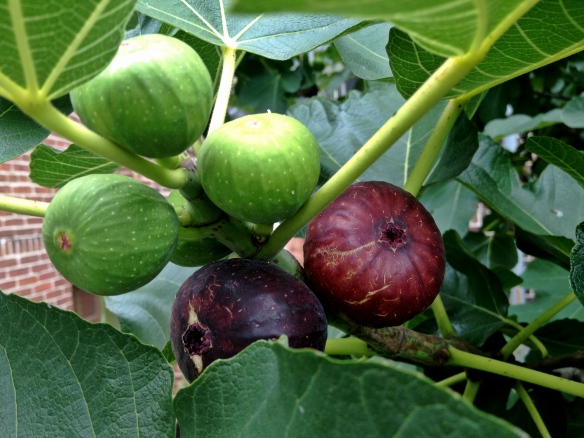 Lauren explained how to identify the figs that were ready for picking (they’ve started to split at what I like to think of as the belly button) and we got to work. 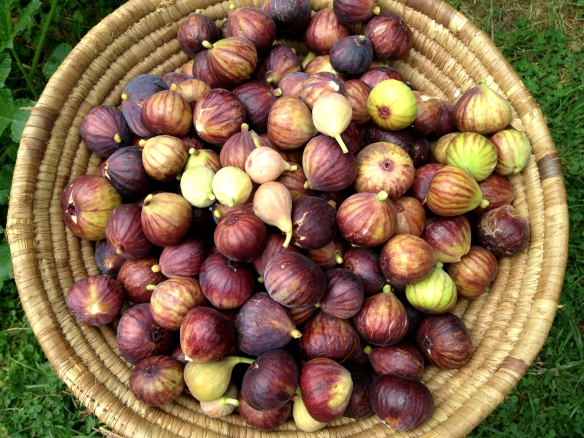 This is about two-thirds of what we picked. And Lauren assured us that there would be just as many the next day. 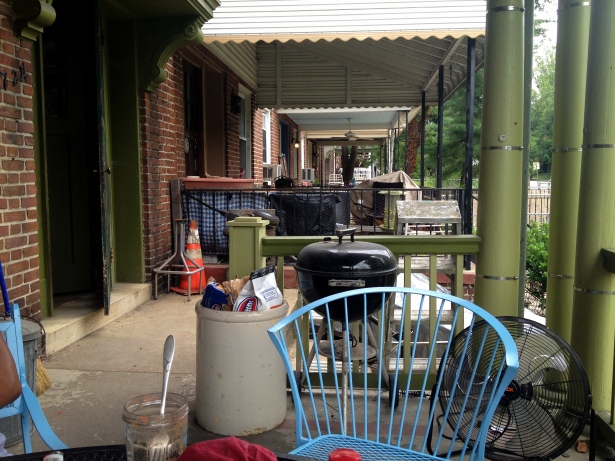 Fig picking completed, we retired to the front porch, which has a distinctly Baltimore feel to it. 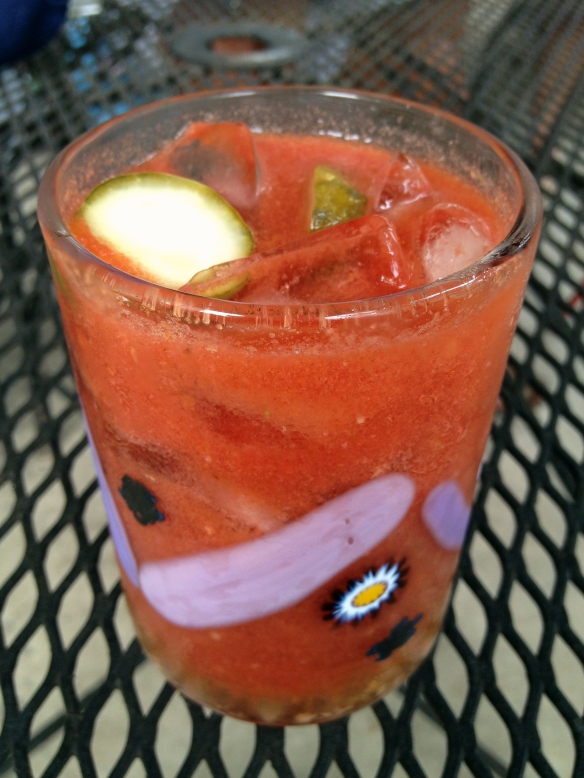 Lauren poured a round of bloody marys that she made using tomato “seconds” from the farmers market. They hit the spot. 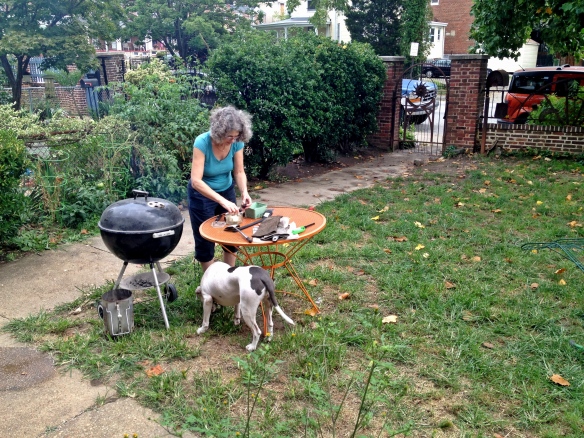 Lauren and David’s two giant dogs stuck close to her as she prepped for our first course on a Weber grill in the front yard. 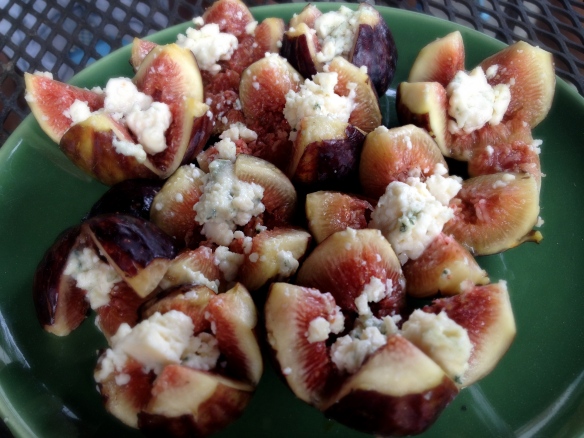 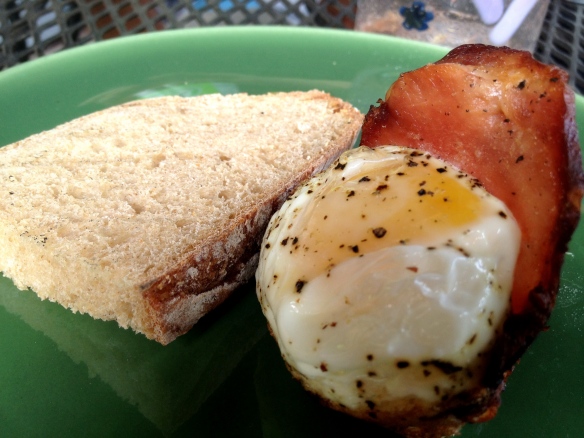 Eggs cooked inside of Canadian bacon cups and toasted peasant bread followed. Lauren did this all on the grill, using a cast iron muffin tin to cook the bacon and eggs. Cooking eggs for a crowd can be tough. (I frequently resort to a frittata or quiche, which can be prepared all at once and served hot or at room temperature.) I made a note of this technique. 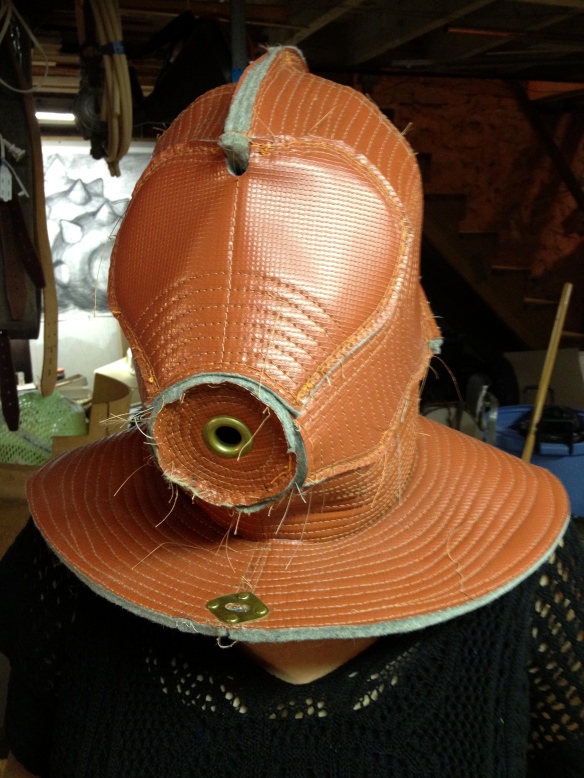 When we had finished eating, David took me and Beth on a tour of his studio space and some of the pieces that he was working on for an upcoming show in Philadelphia. This mask is part of a head-to-toe suit that will be worn by a volunteer during the show. David was kind enough to humor us. It was dark in there.

I could have spent the rest of the day hanging out on Lauren and David’s front porch, but I imagine they had other things to do–and I had a train to catch–so off we went with our basket of figs.

Two weeks later, as I sat at my desk contemplating a mountain of work, a package arrived. Apparently Don had been busy. It contained jars of homemade fig pickles and fig barbecue sauce. The fig love continues.