I took today off of work to catch up on the rest of my life. So far I have researched and made a long overdue appointment with an orthopedist, done a sinkful of dishes, written a cranky letter about my expensive and poorly constructed phone case, and given the cat some much-needed love.

My afternoon will be devoted to a gendered analysis of Lucky Peach. But, before tucking into a pile of cooking magazines, I needed a little sustenance. Luckily, I still had some excellent ham on hand from last week’s Easter supper at Sara and Chris’s place. (If you don’t know Heritage Meats USA, you should.)

Bring a small nonstick skillet up to medium heat with the oil. Add the ham and cook for five minutes or so, stirring occasionally. Add the kale in batches and continue cooking until it’s wilted but still has a little bite. Stir in some salt and pepper, lower the heat and scoot everything to the side of the pan. Crack two eggs directly into the pan and add the butter. Stir continuously, scraping at the sides until the eggs become opaque but are still runny. Add some salt and pepper and, when the eggs are just about done, take off of the heat and mix in with the ham and kale.

There’s a new kid at the Grand Army Plaza Greenmarket. Founded in 2003, Cayuga Pure Organics‘ mission is to create a food system that works. Along the way, they are producing some beautiful dried beans and grains. On Saturday I bought some exceptionally pretty yellow-eyed peas, which I look forward to reporting on in a future post.

I also bought half a pound of freekeh, a grain I’d heard of but didn’t know much about. The Internet tells me that it’s actually green wheat that has been burned to remove the straw and chaff, giving it a smoky flavor. Like many whole grains, it’s high in protein and fiber and has a low glycemic index. My hunch that it would be toothsome and hold up to the lima beans I was planning to cook proved to be true.

Lima Beans with Ham and Freekeh 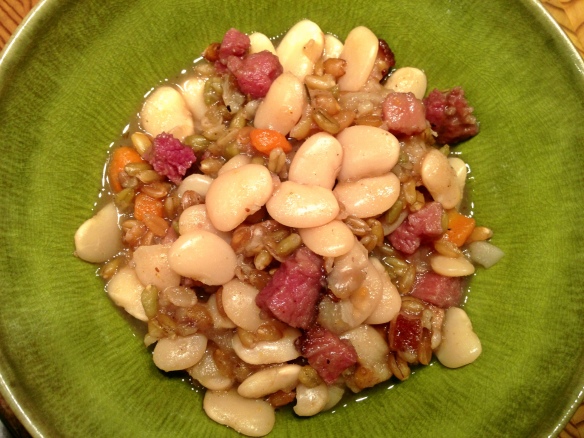 WARNING: This makes a lot of food and is very filling. I ate a decent portion, gave some to my neighbors (who hit me back with some tasty steamed mussels), and still have five portions waiting in the fridge–which is not such a bad thing given that I have a ton of reading to do this week, a big work event on Thursday, and a research paper due on Friday.