My nephew Wally is mad cute. 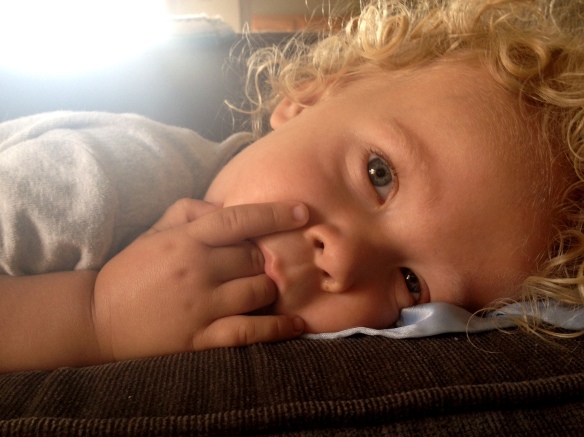 He is also a vector for disease. I have been rocking the same glazed eyes and runny nose for the past week (though I fear they’re not quite as cute on me). By Friday my cough had reached a new level of intensity, rendering sleep a challenge. In the wee hours of Saturday morning, desperate to feel that something other than my cough was “productive,” I set some black-eyed peas to soaking.

I had big plans for Saturday, but a pounding headache and sheer exhaustion compelled me to stick close to home. Luckily, I had those black-eyes peas, a fridge full of vegetables, and friends who were game to scrap our night out in favor of supper on my roof.

I’ve been trying to spend more time on the roof. While the air in my apartment is thick and stagnant in these dog days of summer, it’s always breezy and at least ten degrees cooler up on the roof. A glass of wine and a little al fresco dining as the sun sets will cure just about anything (except maybe this cold). I like to treat my rooftop suppers as picnics, preparing simple, fresh food that’s easily transportable and meant to be eaten at room temperature.

I served this salad alongside whole wheat sourdough toasted in coconut oil and a variation on last summer’s Garden Pea and Spring Onion Puree. A couple bottles of rose rounded out the meal.

Neighbors trickled up to the roof as the sun set. Dishes were carried downstairs and replaced with chocolate and more wine. Just after dark, the supermoon rose above the chimney of an adjacent building.

It is with a heavy heart that I announce that Windflower Farm‘s CSA season has come to a close. The winter season starts in a couple of weeks, so you can look forward to reports on root vegetables, hard squashes, and dark leafy greens.

In preparation for the slow and low cooking that these vegetables imply, I took the opportunity to place one last order for meat from Lewis Waite Farm, which partnered with my CSA for the first time this year. I worked from home this morning so that I could meet an unmarked van full of meat on a street corner near my house. Given that I already had a serious stockpile from my Carnivore Share, I may have gone a bit overboard.

I took the afternoon off to catch up on some reading for school. I’m taking Contemporary Issues in Food Studies this semester and spent most of the weekend writing a paper on Taste, Culture and the Production of Cool. This week, we are shifting gears to examine the systems that create and perpetuate global hunger.

And so I find myself reading about the impact of The Green Revolution–which increased crop yields but came with a serious consequences in terms of individual health, the environment, economic equality and overall food security–while simmering a large pot of Hoppin’John chock full of whole grains, humane meat, organic legumes and locally-sourced vegetables. 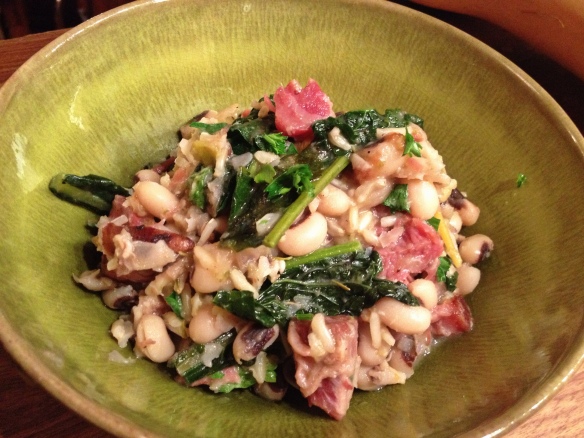 For a little Hoppin’ John history, another tasty recipe featuring black-eyed peas and greens, and a glimpse at my Dollywood pilgrimage, check out A Hoppin’ New Year.